We expect the recovery in agriculture output to cushion 1Q19 GDP growth from disappointments in mining output and weaker manufacturing expansion.

IPI growth missed forecasts in Feb…
The industrial production index (IPI) grew at a slower-than-expected pace of 1.7% yoy in February (+3.2% yoy in January), the weakest pace since June 2018. The fragile reading mirrored the weak export growth (-5.3% yoy in February vs. +3.1% yoy in January) as well as manufacturing PMI (47.2 in March vs. 47.6 in February), which has stayed below the 50-dividing point in the past six months.

Downside to industrial sector cushioned by agriculture recovery
IPI growth in 2M19 (+2.5% yoy) is tracking below 4Q18’s (+3.2% yoy). Unless mining output and factory activity accelerate sharply in March, the segment’s contribution to real GDP growth could weaken in 1Q19. Nonetheless, the downside is cushioned by a recovery in the agriculture sector, particularly palm oil production. We maintain our 2019 forecasts for IPI growth (+3.7%) and GDP growth (+4.7%). 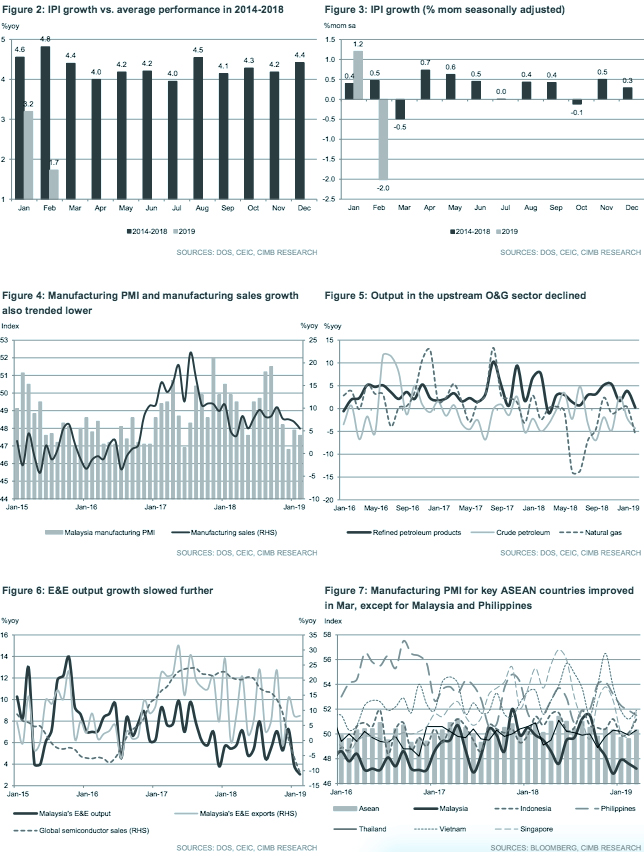 Originally published by CIMB Research and Economics on 11 April 2019.