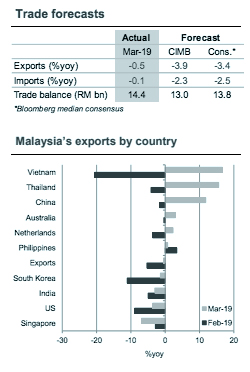 Refined petroleum and LNG segments buoy O&G exports
The stellar rebound in exports of refined petroleum (+16.2% yoy in March vs. -30.9% yoy in February) and LNG (+17.2% yoy in March vs. +8.6% yoy in February) outstripped a steeper decline in crude petroleum shipments (-33.5% yoy vs. -21.8% yoy in February). While a fire in the Pengerang Integrated Complex (PIC) on 12 Apr could pose a near-term risk to exports pending investigations due by May, Petronas’ subsidiaries indicated that the incident was not expected to significantly impact operations. An extended shutdown could impact our GDP growth assumptions (+4.7% in 2019), which had factored in a gradual ramp-up of refined petroleum and petrochemical production at PIC beginning in 1Q19.

Green shoots emerging in manufacturing sector
While the E&E segment contracted in March (-1.9% yoy vs. +4.9% yoy in February), pockets of strength in optical & scientific equipment and electrical machinery may reflect a revival in external demand. The suspension of Malaysia’s CPO export duty until 31 December 2019 and China’s commitment to buy an extra 0.4m tons of CPO from Malaysia could prop up palm oil exports (-14.1% yoy in March vs. -11.4% yoy in February).

Imports of capital goods may recover with revival of mega projects
Imports of capital goods fell for the seventh month in a row (-11.8% yoy in March vs. -15.0% yoy in February) amid weak domestic appetite for capex. The revival of mega projects, including East Coast Rail Link (ECRL) and Bandar Malaysia could gradually stimulate demand for capital goods. Imports of intermediate goods and consumption goods rebounded following seasonal weakness in February. Iron and steel imports weakened (-18.1% yoy in March), following the introduction of anti-dumping duties on steel in March.

Downside to industrial sector cushioned by agriculture recovery
IPI growth in 2M19 (+2.5% yoy) is tracking below 4Q18’s (+3.2% yoy). Unless mining output and factory activity accelerate sharply in March, the segment’s contribution to real GDP growth could weaken in 1Q19. Nonetheless, the downside is cushioned by a recovery in the agriculture sector, particularly palm oil production. We maintain our 2019 forecasts for IPI growth (+3.7%) and GDP growth (+4.7%).

Light emerging at the end of the tunnel
Malaysia’s manufacturing PMI rebounded from 47.2 in March to 49.4 in April after new export orders increased for the first time in five months. While exports contracted 1.5% yoy in 1Q19, we think progress on a US-China trade agreement and green shoots emerging in regional industrial indicators could presage a turnaround for manufactured goods exports in 2H19. 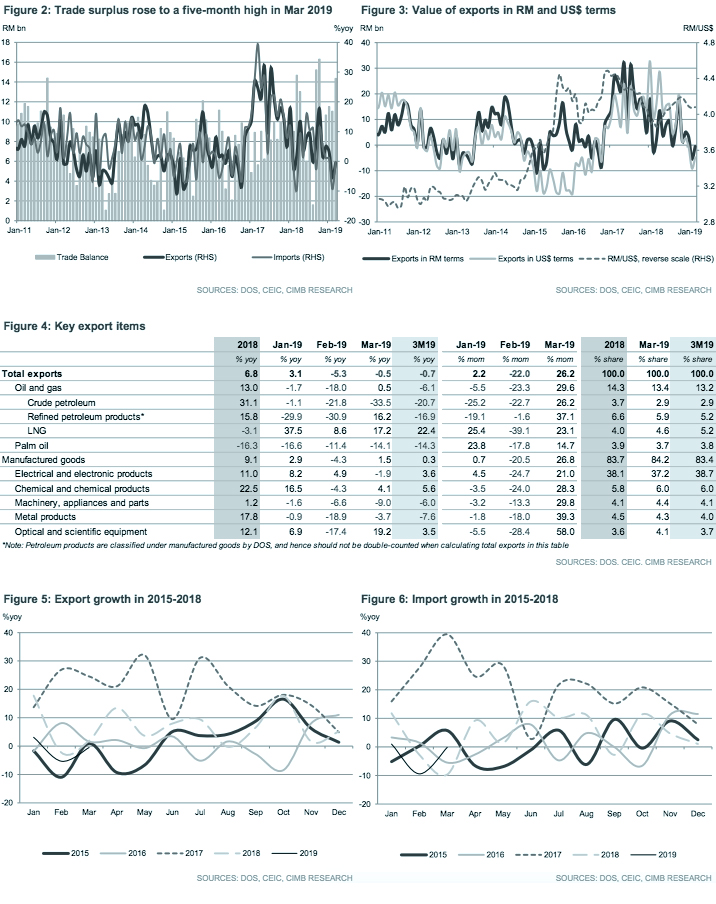 Originally published by CIMB Research and Economics on 3 March 2019.